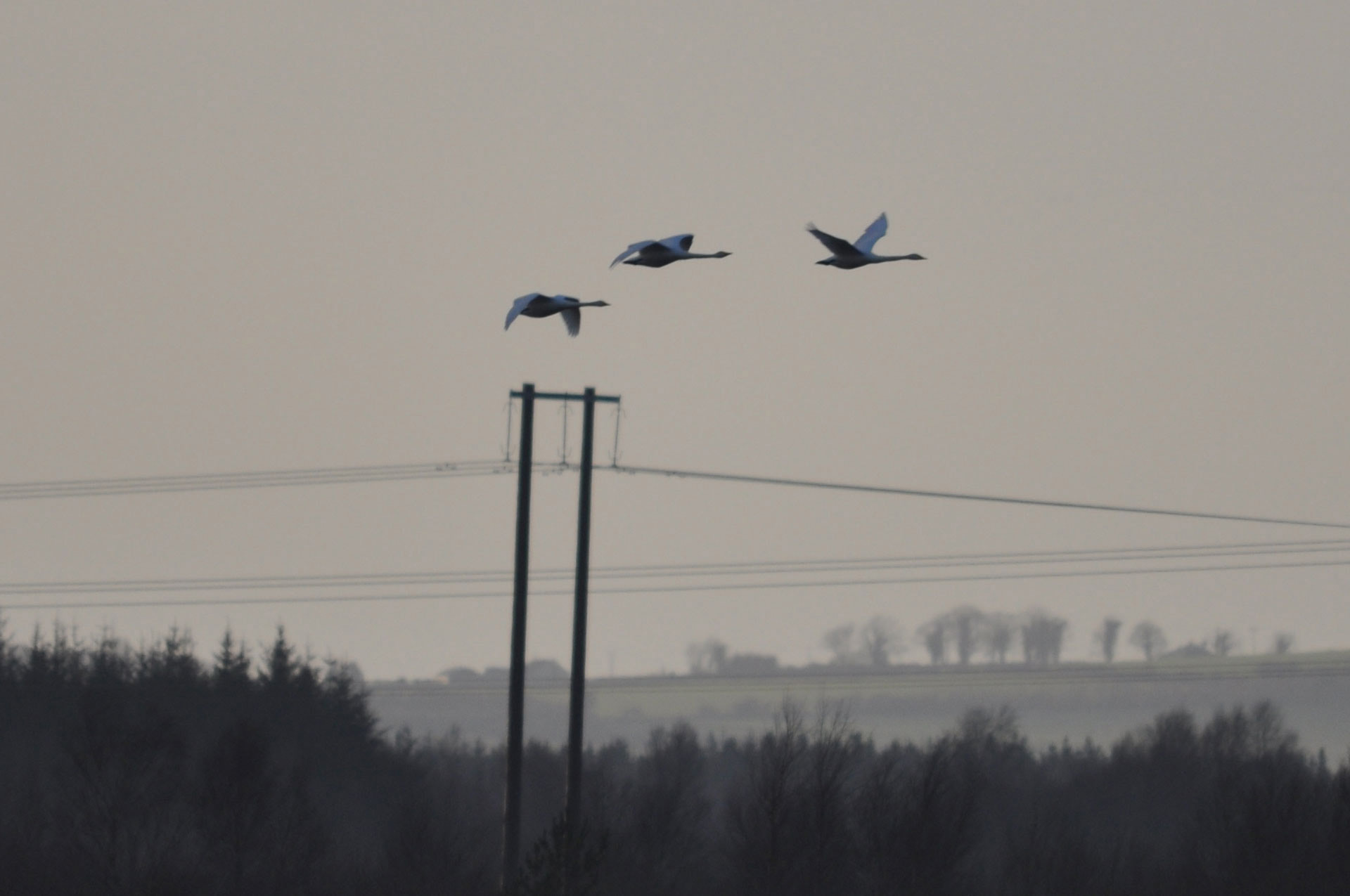 Electric power lines are now recognised as one of the most important causes of bird mortality internationally.  Power lines have the potential to cause fatal injuries to birds; as a result of both collision and electrocution. They can also result in habitat loss, with certain bird species avoiding areas where power lines occur.

Many power lines in Ireland were installed prior to the Birds and Habitats Directives and some cross though important avian habitats and migration pathways.  The recent increase in wind farm construction has resulted in the requirement for the construction of a new network of transmission lines. However, the issues in relation to birds and power lines are now understood better and new developments like these are subjected to detailed assessments and a stringent planning process.

A significant issue in Ireland is the ongoing proliferation of one-off houses across our countryside, and the requirement to provide electricity (and communication) connections to these houses.  Unlike wind farm grid connections and national electricity transmission lines, the indirect and cumulative environmental impact of these one-off housing developments is rarely considered. Power connections to “one-off” housing development can pose a significant collision risk to birds. Indeed, one-off houses have a number of direct, indirect and cumulative environmental impacts which are rarely considered fully prior to these dwellings being constructed.

How power lines can impact on birds

Birds can find it difficult to see power lines, particularly in poor weather, while the large wingspan of other birds can bridge the gap between two lines, or a line and a pole, resulting in electrocutions. The collision risk depends on a number of factors; the species and their behaviour, the environmental factors and type and design of the power lines themselves. In most cases the physical impact of collision leads to death or to fatal injuries, although some birds may recover. Species that are particularly at risk of collision with power lines are birds flying at night, birds flying in flocks, large and heavy birds with high wing loading and of low manoeuvrability, and birds that fly low and fast. Migrating birds flying at heights below 50m have a significant collision risk. Moreover, species that congregate in large flocks are more vulnerable to collisions than solitary species.

Birds flying regularly between feeding, roosting and nesting areas are particularly at risk

Flocking behaviour means that individual birds in dense flocks have reduced visibility and therefore less time and space to undertake avoidance manoeuvres. Risk may also be increased during certain scenarios, for example disturbance during weather events or, for example, agricultural activities. Birds flying regularly between feeding, roosting and nesting areas are particularly at risk. Overhead power lines can lead to displacement and the loss of feeding areas, and there is a possibility of a loss of breeding and roosting sites.

Whooper Swans are particular vulnerable to power line collisions. They are winter visitors in Ireland from Iceland, are listed under Annex I of the EU Birds Directive. Whooper swans are not particularly manoeuvrable in flight, turning in wide arcs, due to their high wing loading. They also only have a narrow zone of vision, reducing their ability to detect thin horizontal objects ahead of them. Whooper Swans are prone to collisions with telephone and power lines, trees and wind turbines during their typical low-altitude flights between roosting and foraging sites. Flights between foraging and roosting grounds are often at low-altitude in low light levels (e.g. dawn and dusk periods) and therefore in poor visibility. Monitoring of Whooper Swan daily movement patterns has shown that flocks typically fly at 5-30m above the ground. Poor flying conditions, including strong winds and poor light conditions that could affect a birds manoeuvrability during flight can be expected to greatly increase the collision risk.

The orientation of the line should consider factors such as bird flight paths, prevailing winds and topographical features. The majority of bird collisions with transmission lines appear to be associated with earth wires, which are normally installed above the conductors and are less visible to birds than the conductors. Birds may attempt to avoid the towers and conductors by increasing flight height, resulting in collision with the earth wire. Therefore with this in mind the lines can be designed to be more visible to birds.  On existing lines in sensitive areas, marking devices can also help birds see power lines better and therefore avoid collisions. However, although these do result in significantly reduced mortality, this reduction has been shown to be only around 10% (although it is higher for dynamic devices). Although any mortality reduction may be very biologically relevant for populations of high conservation concern, it is clear that line markers are not an ideal solution.

A single avian collision incident with a power line can disrupt electricity service for large numbers of customers at a time, so power companies want to avoid these impacts if possible.  Evidence of bird mortalities at power lines is under-recorded due to general absence of monitoring, and scavenging. It is often only when power lines actually come down that the problem is addressed. However, it is clear that many birds can be killed without actually bringing down power lines.

We are Ireland’s leading ecological  consultancy and have extensive ornithological expertise. if you require an advice on birds please do not hesitate to contact us at +353 61 419477 or at info@ecofact.ie.